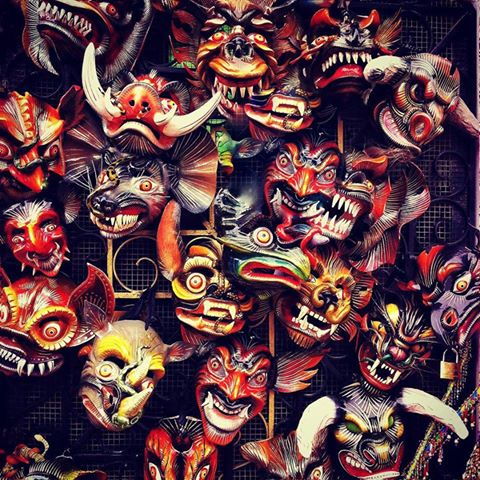 What are demons?
You can see demons as dark or evil forces, entities or simply negative energies. The disadvantage of the word ‘demon’ is that it has religious connotations, which might create confusion. However, I still prefer the word ‘demon’, as in my perception they do have a separate, nonphysical shape, as well as a separate consciousness. They are different from human life forms, with different values and desires, who interact with us, mainly by manipulating our emotions and thoughts. This is NOT to our benefit, as they feed on our negative emotions. The more we suffer, the fatter they get. The more pain, anger, guilt, sadness, jealousy, outrage, despair and what not they can trigger in us, the more powerful they become. That’s why they do everything in their power to make us suffer. And powerful they are, these days.

Shadows on the wall
In the modern world, demons are considered non existing. Denying the existence of these nonphysical life forms interacting with humans and feeding on their emotions, has gained them enormous freedom. Nowadays, they can pretty much roam free and do what they want. They hide in plain sight, while they mess with your head and your feelings, without you being aware of it. Remember these dark shadows in the room, when you went to sleep as a child? They were real. Remember that bad trip you had? That was real, too. Demons have always been part of our reality. They exist as long as humanity does, maybe even longer, and their grip on humanity is huge.

Demons don’t exist
If you want to continue reading, but you also want to insist demons do not exist, you may use the idea that demons are part of our psyche. If so, they are not separated from us, but an intrinsic part of us. This could just as well be true, and for the rest of my story it doesn’t make a big difference, so be my guest.

I feel you
Now we can talk about emotions. As human beings we have feelings, emotions and sensations. For now, I don’t differentiate between the three. They occur in relation to the world around us and the world within. It is our ability to feel, that makes us human. It’s our unique way of experiencing reality in all its splendor. As I said, demons feed on our emotions, especially the negative ones. The wide specter of human emotion is like a buffet to them. They are like parasites who live of our suffering, and therefore want us to be in emotional distress all the time. Places like concentrations camps, war zones and shopping malls are their favorite hang out spots. They’d like the whole world to be like that!

Messed up
Why does so much shit happen in the world? It happens, because demons are interfering with our reality. They have found many ways to make people suffer. They use your beautiful human capacity to feel, to be emphatic, to care, against you. They create situations that are so unjust, they will make you angry. They threaten your children, so you get scared. They hurt the innocent, in order to ignite your rage. They blame and shame you, so you feel guilty and shitty about yourself. They bring lies and fake stories into the world, so you get confused and uncertain. They do everything in their power to bring out the worst in you. A good chunk of hatred or despair… they devour it. They love it when you lose control, or have an emotional breakdown or a fight, preferably with a loved one, because that hurts the most. They love it when you get sick and then get the wrong treatment. Your addiction to drama is also induced by them. A world full of suffering, injustice and pain is their dream come true.

To suffer is NOT human nature
To say that suffering is the underlying current of the human realm is the biggest lie of all times. It is human nature to have emotions that are appropriate to the situation. That is very different from suffering! Emotions are energy in motion. They are there to make you experience life. They are there to help you respond adequately to any given situation. However, creating a world in which emotions are constantly triggered and stretched to a level of insanity, is NOT human. That is demonic.

Food for demons
This is what is happening these days. Global crises are being created that are extremely sick and unjust. People automatically respond with strong emotions, which they then can’t handle. They get overwhelmed, can’t think clearly anymore and succumb to actions they would normally never perform. The many scenarios that you see happening in the world right now, are created with the sole purpose to make you suffer. They use your kind, human nature against you. The more extreme your emotions, the bigger the feast for them. That’s why they don’t hide their crimes, either. They enjoy you protesting, becoming all worked up, sad, outraged and scared. They love it when they see people fighting, when they see riots and looting, when they see families and friends split up, when they see how despair, pain and confusion spread around the globe, like a virus. It empowers them.

They love the suffering of old people in nursing homes. That’s why they manipulate people to lock them up, under the disguise of protecting them. If you could see it, you would see swarms of demons circling above the old people’s homes, like vultures, feeding of the intense suffering that rises up from them. Imagine how Manhattan looked like, during the night of the riots.

Party time
Right now, it’s a global feast for the demons. Few people recognize this phenomenon. Everybody gets so easily carried away. With the Corona crisis you mainly see fear and panic everywhere. Yummy. With the race issue in America flaring up, anger and rage exploded, as well as guilt, shame, finger pointing and more division.

The spiritual community, trying to be so awake and aware, reacts extremely emotional these days, too. They either attack and shame what they condescendingly call the ‘sheeple’, or the ignorant, or ‘those who are not awake yet’, or they deny with almost pathological force what’s going on, insisting on a false sense of well being. Listen, if you still say ‘It’s all meant to be’ at this point, you really need a good shake.

Mad world
So, what is appropriate? How do you react adequately to the levels of injustice and insanity you see around you? What do you do when your family abandons you, because you don’t follow the rules as much as they do? How do you react when people attack you on social media and call you crazy, irresponsible, Trump’s minion or even a murderer, because you question the measures, the narratives and the mainstream media? What do you do, after having seen a video where a little girl talks about her experiences in a satanic cult, or when you see an interview where someone shares the truth about vaccines, viruses, governments or other plots? How do you react when you become aware of yet another layer of deception, induced pain, abuse and disgusting practices of slavery and manipulation? How do you respond when someone in the shop tells you off, when you politely reach for the peanut butter? What do you do when you see someone you love wither away? You can’t avoid feeling it, right? And you shouldn’t want to! You are a human being! To be able to feel, is your greatest gift.

Warrior spirit
If someone provokes you, feel it and stay with it, as long as it takes. Really, there’s no work more important than this. When hurt, when desperate, when outraged… stop. Don’t speak, don’t act, but go to a quiet place, where you can be alone. Stay as still as you can, while the emotion washes through you. Let it rip you apart. Let it burn you to the ground. You can handle it. Resist thoughts like ‘I can’t take it anymore, this is too much, I am weak, it’s all bad.’ Resist the urge to escape, to distract yourself, to do something or to fight back. Not yet. If you fight back, let it be from a place of presence and being centered, not because you’re losing it. If you fight back because you’re out of control, you feed the demons. There’s a lot of precious energy wasted in the useless discussions and fights amongst people, on social media as well – or maybe especially on social media.

Be cool
Emotions have a tendency to peak and then slowly subside, by nature. Your calm, your inner poise, always returns naturally, when you allow it. You’ll find that when you manage to stay with an emotion as described above, you will not lose energy. After it has subsided you will not feel drained, but empowered. That means you have NOT fed the demons, those wicked energy thieves. The life force is still within you, now transformed into a calm sense of awareness and with usually a crystal-clear perception of what the next step is. This is the work. This is the path of the real hero.

You’re not a robot
Don’t confuse dealing with your emotions this way, with apathy or inertia. This is not about refraining from action. This is not about striving for, or idealizing not having emotions, either. This is definitely not about meditating until nothing touches you anymore. On the contrary! You’re not meant to be indifferent or non attached, that’s a dead-end road. It’s no spiritual achievement to be serene and in a state of equilibrium constantly. It might be for a robot, but not for a living human being. In the human realm everything is always in motion, also your feelings. That’s how it’s meant to be!

Take your power back
Once you are aware that demons feed on your emotions and that a lot of shitty things happening in the world are created by them, you might feel the desire to not be manipulated by those fuckers anymore. You might become more cautious as to which fights you pick, whom you hang out with and to which degree you allow the mainstream media, politics, strangers or even loved ones throw you off balance. When injustice happens, you don’t show solidarity by being emotional and acting out. You show solidarity by not losing it and by taking the right action.

What is worth fighting for?
The battle going on in the world right now is not between black and white, men and women, government and people, left and right, spiritual and mundane. It’s not even between rich and poor. The battle is between humans and demons. And however weird it might sound, this is how you win: by no longer allowing any demon to feed on your emotions. Because by doing that, you starve them. And by starving them, they will lose their power. And when they lose their power, they will no longer be able to create hell on earth.

We are here to create heaven on earth. And yes, there are angels too.