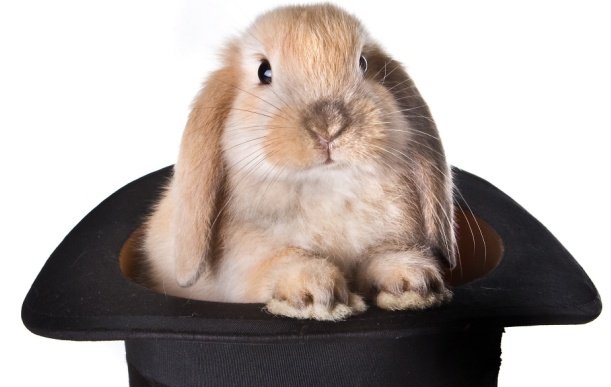 Everything is your teacher. There are clues, messages and lessons everywhere. In nature, in things that you just happen to hear or say, in images, in your dreams. The language of the heart is just as important as the language of the mind. Scientific proof is only half of the work. To allow yourself to feel is the other half.

Hari Om Ganesha
In India there is great awareness of the importance of synchronicity, in order to know the truth. There’s a temple, somewhere in India, dedicated to Lord Ganesha, the elephant god who brings good luck. In this temple all your questions will be answered. You kneel before the gigantic, golden statue of Ganesha, you do your puja (prayer) and then, in all humbleness, you ask your question. When thereafter you walk out of the gate, the first thing your hear, from anyone who passes by, is the answer to your question. Even if it’s ‘Let’s have a curry’.

Fiver
In ‘Watership down’, the epic story about a rabbit colony, it’s the visions of Fiver, the most vulnerable and weird rabbit of them all, who guide the main decisions of the colony. Fiver has epileptic anxiety attacks, accompanied with intense visions, which always warn the rabbits when they are in danger and have to flee.

Gods and goddesses
Ancient Greece had one of the most sophisticated and philosophical civilisations ever. Every doctor, until this very day, swears their oath on Hippocrates. The beginning of this oath is as follows:

‘I swear by Apollo the healer, by Asclepios, Hygieia and Panakeia, and by all the gods and goddesses, making them my witnesses, that I will carry out, according to my ability and judgment, this oath: I will do anything in my power to help the sick, according to my ability and judgment, but never with a view to injury or wrong-doing. Neither will I administer a poison to anybody when asked to do so, nor will I suggest such a course.’

The oracle of Delphy
And then there was the oracle of Delphi, a woman named Pythia, who channeled the God Apollo and gave advice to counselors and leaders all over the world. The world famous sayings ‘Know thyself’ and ‘Everything in moderation’ come from her. By the way, Apollo and Gaia also had stuff to work out, but that’s another story.

Shamans
Shamans travel to the underworlds and other dimensions, where they talk with entities, gods and spirit guides. Sometimes they use entheogenes, sacred plants, to expand their consciousness. Animals as well offer their help and advice and guide the shaman. Many shamans have a spirit animal, a totem, who always accompanies them. Most western medicines contain herbs and plants from the Amazon, plants that have been used in the jungle for centuries. How do shamans find the herbs and plants they use? How do they know which specific herb or mixture they need to make, in order to cure a certain person from a certain disease? They do this by communicating with and being guided by the plants themselves. When you ask a shaman ‘How do you know this works?’ he will say ‘Because the plant told me so.’

Intuition and inquisition
Where do shamans, psychics, fortune tellers and prophets get their knowledge from? What skills do they have, that we don’t? Why are they so often spot on? What sense do they possess? And why are people who are in touch with intuitive wisdom, with a wisdom that comes from other realms of reality, so often prosecuted? The inquisition and the stake are still fresh in our memories. It’s happening now too. No deadly action is connected to it yet, but the malignancy, the ridicule, the rejection and criticizing of people with intuitive knowledge is in full swing again.

Fear
Could it be that the rejection of intuitive knowledge has anything to do with fear? Fear of change, fear of truth, fear of freedom, fear to let go of that which you always believed in, that which gave you a feeling of security? Is it the fear of uncertainty, insecurity, the unknown? What if everything you though was true, isn’t true after all?

Tin foil hats
Of course you can lie and cheat with superstition, magic, gemstones, intuition, pendulums, dreams, psychic abilities, visions and tin foil hats. In the old days we called that ‘gypsy talk’, when we hadn’t completely chased the Roma people away. But lying and cheating is not reserved to gypsies, alternatives or spirituals. We all do it, and maybe especially the scientists, politicians and religious leaders. ‘Research shows’ is one of the most abused phrases in the media, also in the spiritual scene. Lying and cheating has nothing to do with the method or the medium itself, but everything with the intention of the one who uses the religion, the scientific results, the intuition, dreams or information of his spirit guides, to offer information. What’s the difference between fact and assumption, truth and lie? It has everything to do with the intention of the individual.

Look less at the method, but more at the intention of the person who is behind it, when someone poses something as the truth.

Feeling
The key to the truth is amongst other things the capacity to feel. You can clearly feel the intention of someone who says something. It makes you feel attracted or repelled. So, feeling is absolutely important when it comes to distinguishing whether something is true or not. You feel whether someone speaks the truth, you feel how wise someone is, you feel how much love flows into a certain message, you feel the level of integrity in someone. You can see it, feel it, observe it. In our culture this feeling might have been knocked out of us, but that doesn’t mean it’s not important.

You are extremely manipulable
Are we really that manipulable? Are we that easily influenced? Oh yes, we are! That’s what NLP is based on, something all people in power, all talkshow hosts and all Hollywood stars are experts in. You should only know how gullible you are. All of us! What if we’d start looking at that, instead of fighting with each other about right and wrong, out of that unconscious conditioning. Investigate how gullible you are. Lose solid ground for a while. Perhaps that’s exactly what needs to happen.

Crossing the river
Moving from one paradigm to the other is like crossing a river. The old paradigm gives you a feeling of safety, of solid ground beneath your feet. The new paradigm is yet unknown, but you have to cross that river. As long as you are in the river it feels scary, because you have no solid ground beneath your feet. Only when you stand on the other shore, firmly planted on both legs again, peace will return.

Rescue swimming
At this point in history we are crossing an important river, as a humanity as a whole. So, please be careful with yourself, and with each other. The more people make it to the other shore, the better. Help each other not to drown. Please, don’t start fighting while you’re in the water, you will just both go under. Save your strength. Be kind to each other.