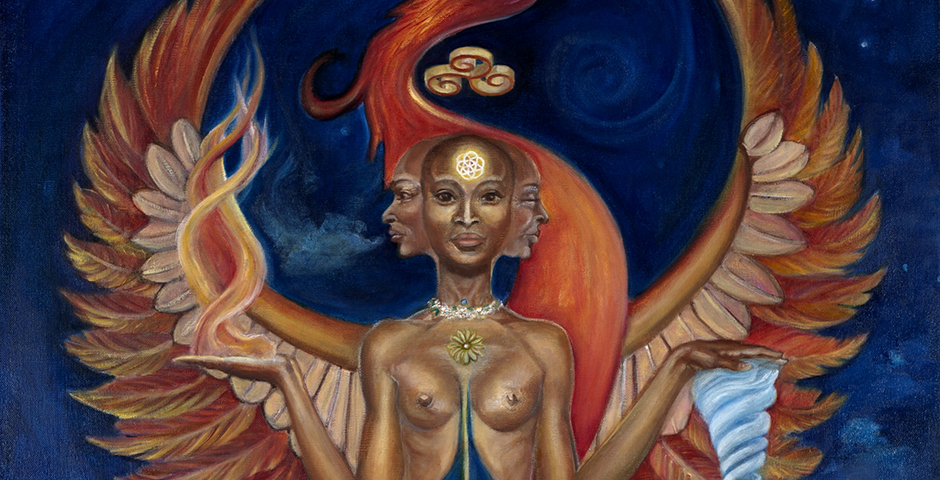 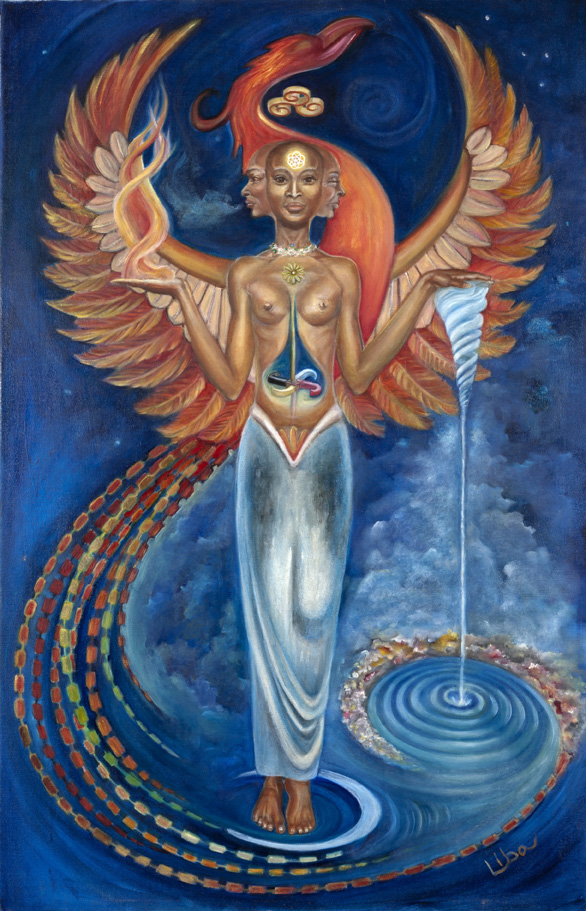 Long ago, when mankind was not yet identified with the body, there was no fear of death. Dying was considered a rite of passage, a journey to another dimension where the soul stayed intact. Nothing was really lost. Birth and death were portals where we stepped from one reality into another. The womb was honored as a sacred temple, an oracle, the only place in the body with the capacity to attract souls from the spirit world and allow them to reincarnate on earth. This was the domain of woman, which gave her a mysterious power and ensured her awe and deep respect.

The portal of life

The womb is in a constant lucid dream state. She is in two worlds at the same time, the world of the living and the world outside of that. She is the master of life and of that which we call death, the state where the soul has no physical body. The womb has the power to call in a soul and give it access to this world. That is pure, holy magic. Until this very day we don’t understand how it works and we don’t have to either. It’s the miracle of life.

At a certain point in evolution the fear of death occurred and with that the desire to control life. The mystery was no longer honored but feared. From this fear the relationship towards the womb changed as well. Her mystical powers were no longer seen as holy, but as something threatening, something that had to be controlled. However, the womb is uncontrollable. It’s like trying to control your dreams while you are awake. It just doesn’t work, as you can’t reach it. Nevertheless it has been tried throughout the centuries, something that in many cultures has resulted in an over-valuing of the intellect, ‘I think, therefore I am’ instead of ‘I dream, therefore I am.’ This has nothing to do with male or female ideas, but with a cultural concept of what is valuable and what is not. The aboriginals, the oldest culture still alive in this world (50,000 years) are an exception to the rule. They know we create this reality through our dreams. They call this world ‘the Dreamtime’. This ancient knowledge hasn’t been lost to them yet.

Returning to the womb

Currently we live in a world where in many places the head is seen as more important than the womb. Even in Taoist and Tantra schools the idea is to bring the energy up from the lower body, as if the higher chakras are better than the lower chakras – as if enlightenment happens in the head. This reflects a linear way of thinking that removes us from the circular, intuitive wisdom of the womb. But deep down men and women want the same thing, something they have always wanted, since the beginning of time. They want to love one another, they want to connect to the source of life and celebrate their union with the great mystery, through connecting their bodies and hearts.

The trance of good sex

How do you connect with the dream consciousness of the womb? The best way is sex. Do you ever experience entering a trance when you have really good sex? The penis of man has the power to awaken the dream consciousness in the womb, meaning: to create a conscious connection between the Dreamtime and time as we know it, inviting the manifesting power of the womb to literally flow into this world. A child can emerge from this, a miracle in itself, but also other forms of creativity, like feelings, insights, visions, healing, etc. This is the very reason the Shiva lingam and the yoni – god’s penis and the vagina of the goddess – were seen as sacred in ancient Hinduism.

The magic of the body

Is there a difference between a divine penis and vagina and that of ordinary men and women? Why it is not called ‘Homo lingam’? Divine genitals are not as far away from us as we might think. Religion has placed God far away from us, somewhere beyond the stars, while true divinity basically means that we, mortal beings, become the embodiment of the virtues we attribute to God: love, compassion, justice, wisdom, oneness, etc. This is the original function of sex: to experience our divinity. Our body is a temple of consciousness. When we recognize ourselves, our true essence, and start honoring it, we will naturally become more careful and selective when it comes to choosing a lover.

The gates of consciousness

Our bodies have several ‘gates of consciousness’ with the ability to recognize the true character of our lover with great clarity. In this article I would like to talk about the seven gates of consciousness in the female body. For men it’s different, they have fewer and different gates. The gates in the woman’s body are also called ‘the guardians of the womb’. They are there to protect the womb by selecting a lover with great care and awareness.
The first gate is the eyes: do you enjoy looking at him? Do you like his face, his hands, his posture? Do you find yourself smiling when you look at how he moves, how he works, how he expresses himself?
The second gate is the ears: does it make you feel good listening to him? Does his voice sounds soothing to you? Is there a sensuality in the way he talks that makes your body respond?
The third gate is the nose: does he smell nice? This can be a very subtle, mostly subconscious gate, but smell is a very important factor in our choice of partner.
The fourth gate is the skin: do you long for his touch, because it feels delicious when he touches you? Do you relax and don’t want him to stop when he gently strokes your arm, your back, your belly or any other part of your body?
The first three gates are rather definitive. It’s an instinctive ‘yes’ or ‘no’ and you can’t change much about it. From the fourth gate there is the possibility for initiation. When you feel it’s worth it you can lovingly explain to your partner how you would like to be touched. Men are women need each other, to be initiated into a true, heartfelt understanding of the sexual nature, the needs and desires of the other sex.

The fifth and sixth gate

For a lover to pass through the first four gates requires a wholehearted ‘yes’ to the above questions. Only then can he pass to the fifth gate, the mouth. Do you enjoy his lips, his tongue, his mouth on yours, the way he tastes? Do you feel something inside of you respond willingly to his kiss? If the answer is ‘yes’ you arrive at the sixth gate, the nipples. In fact the first five gates are identical for men and women, both in what they are and in their sensitivity, but the nipples of women are extraordinary. They are highly sensitive sensors that react to a lover’s most subtle touch. I wonder whether some men might have the same experience.

The seventh gate: the clitoris and vagina

The seventh gate is the clitoris, the labia and the mouth of the vagina. In the past few centuries the true role of the clitoris has been pretty much forgotten. Until recently she was considered rather useless, while no other organ in the body has as many nerve endings as the clitoris. The clitoris is the last and most significant gate keeper of the womb. Only when a lover is capable of touching the clitoris and the vagina with full attention, love and dedication can a woman truly receive him. If the clitoris says ‘yes’ a woman’s whole body relaxes, the vagina and the vaginal tract become soft, warm and moist and the womb knows: ‘It’s time’. Time to wake up, time to share the dreams, time to channel her timeless wisdom and magic. When the seven gates of consciousness are being ignored or disrespected, either by the man or by the woman herself, it’s impossible to experience the magic of the womb.

In short: this is the true function of physical pleasure, of what we call foreplay. We received our senses, nipples, clitoris and vagina in order to reach a state of surrender, through pleasure and delight, in order to truly connect with the womb, the female source of divinity. For men this is identical, even though they have partly different gates of consciousness. The key is love, because only when love is present can we as human beings really experience pleasure when we make love. That’s essentially what our senses and bodies, male or female, are looking for. The womb is the Holy Grail. The seven gates of consciousness are her sisters, her guardians and her connection to the outer world. There is no separation between sex and God. Sex IS God. 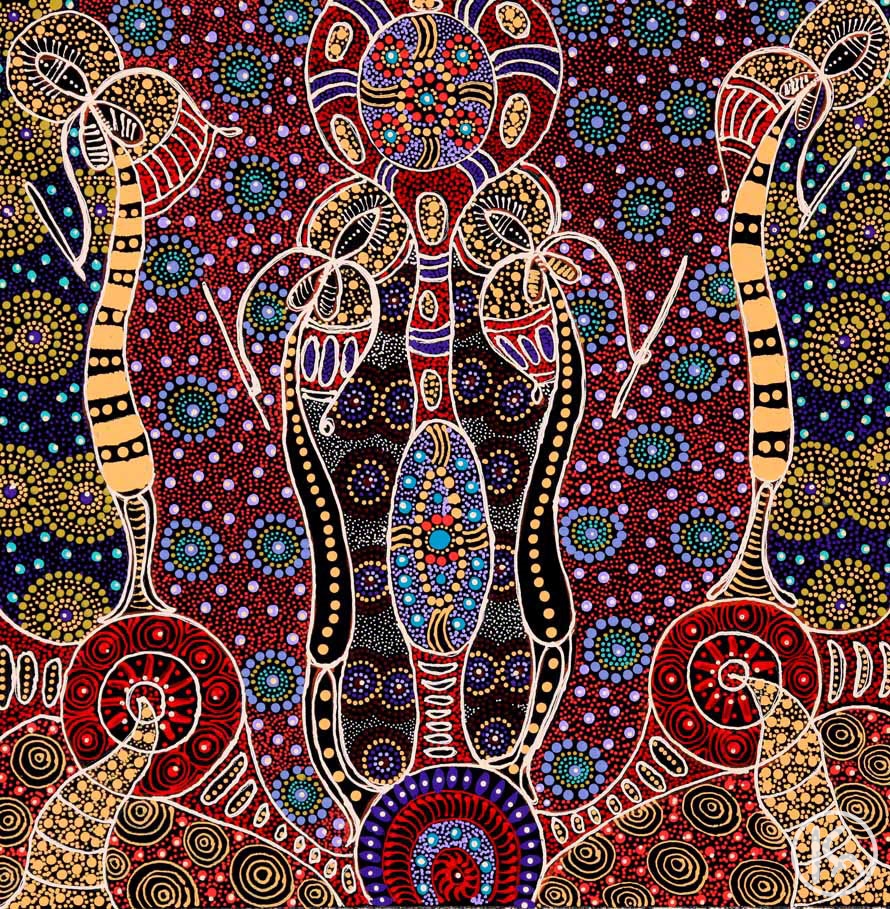