Portugal
She started at the wild coasts of Portugal
The people, barely used to not living under fascist regime, followed the rules without much ado
Even the fishermen at sea wore a mouth cap, while the wind was blowing in their faces
‘We don’t fear Corona’, they said apologetically, ‘we are afraid of the fines.’
It was alfarroba (carob) harvest time in Portugal

In august the carob trees carry their long, brown wonder beans
Also called carob beans
It is the secret medicine of Portugal
That’s why everybody is so healthy
That’s why nobody gets Corona
The Portuguese know what real wealth is

Spain
Then Spain followed
She drove through olive groves and orange fields
Picked pomegranates beside the road
At the gas station nobody knew which way to to anymore
The marks on the ground didn’t fit at all
But, everybody pretended everything was okay
A Spaniard is proud, he will not show his discomfort
Instead, he laughs
Spaniards are masters in laughing with their eyes
Which is good, because the mouth cap covered everything else of these beautiful faces
Luckily nobody was carrying sun glasses in Spain anymore

France
In France, the amount of rest places along the highway had doubled
One every 10 kilometer!
They all had self cleaning toilets, in which literally everything got disinfected
It was the kind of toilet that locks itself hermetically and where the whole thing got thoroughly washed, from top to toe
The toilet pot, but also the sink, the floor, the wall and the ceiling
She was always scared to get stuck in one of those, before the big cleanse would happen
However, with these toilets they had forgotten the fact that the toilet paper would not flush through the toilet quick enough
Instead, during the cleanse the toilet paper got lifted out of the pot
When the next visitor would enter the space, the brownish, wet toilet paper was smeared out everywhere
It was on the ground, stuck to the wall and every now and then, would fall down the ceiling, like a wet blob
‘Well, isn’t that a great way to combat Corona’, she said to a haughty Frenchwoman
She didn’t think it was funny
She did

Belgium
No where, they were as obedient as in Belgium
Even the pets were wearing mouth caps, she saw in the supermarket
Some dogs had a crocheted pink or blue mouth cap around their mouth
Just like their owners
She also made the funny observation that the Belgians would light up their high ways all night
There were street lights every 10 meters!
‘Is that to combat Corona?’ she asked the cashier
‘Well, if you can see each other better, it is easier to keep your distance, isn’t it?’ she replied in a stiff voice, from behind her mouth cap

The Netherlands
She was almost in the Netherlands
‘Why is everybody so docile?’ she wondered
‘Why is not everybody like the Dutch?’
When she crossed the border, she sighed with relief
On the radio she heard that the government had resigned
The Dutch WHO department was closed and the nursing homes were open
The people had taken matters into their own hands
She was not surprised
She had seen it coming

She was happy to be home again
Maybe these carob beans, that her car was packed with, were not even necessary anymore 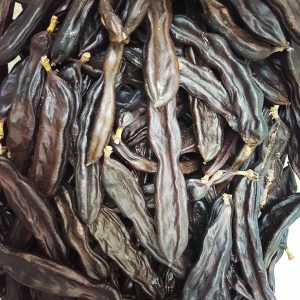