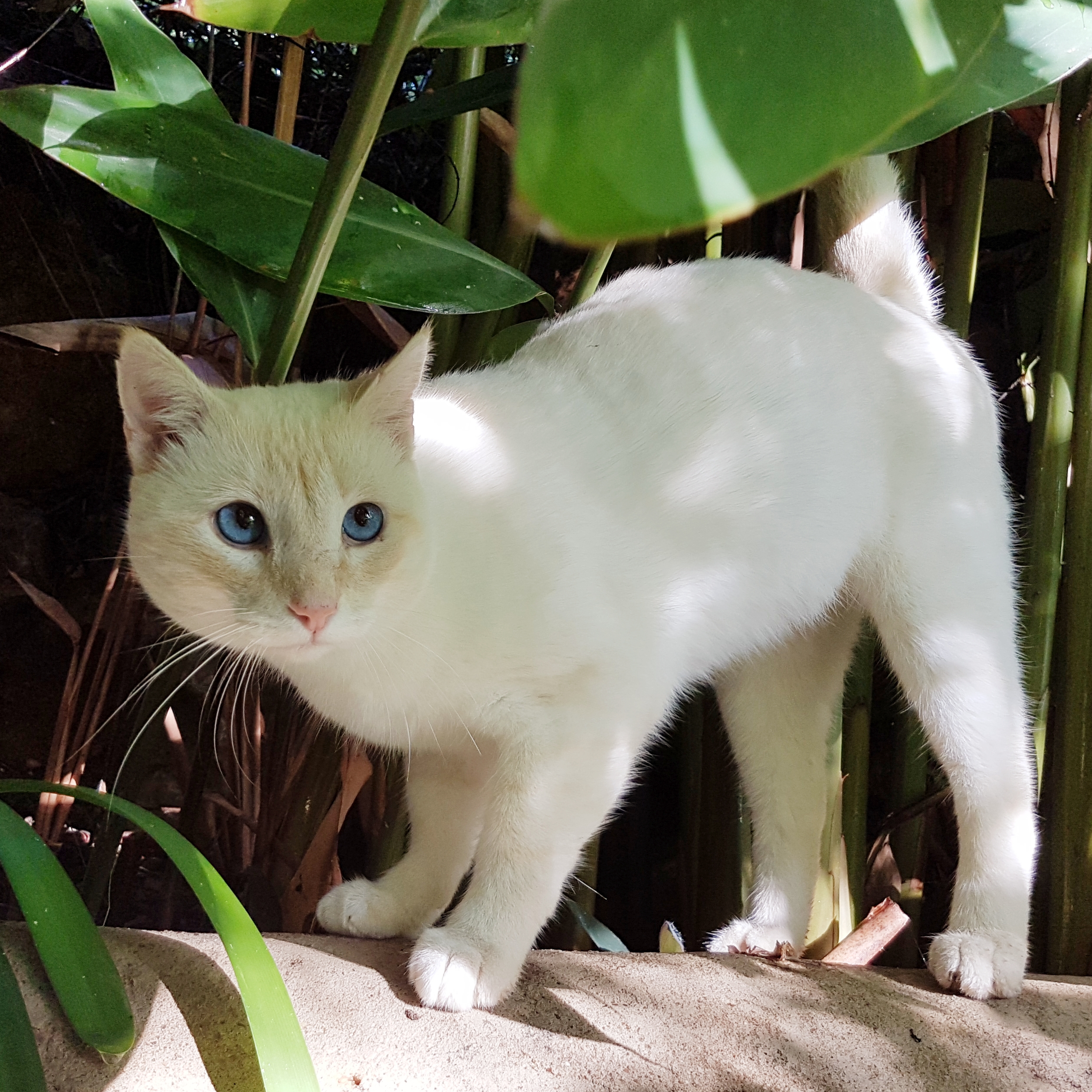 Once upon a time, in a land far, far away, there was a wild cat
He had lost all his brothers and sisters
He was very hungry and lonely
He lived off what he could catch in the wild
He ate mainly mice, but he didn’t even like mice
He became very skinny and strong
He could run very fast
But all this time, he dreamt of a home, of his own safe haven, of warmth, cuddles and people who loved him
And most of all, he dreamt of food
Delicious food, as much as he could eat

One day he discovered a remote house by the river, hidden in the southern hills of Spain
There was food, he could smell it
But there were also vicious dogs and jealous cats that would chase him away, he knew
However, to his utter surprise, he found little bowls with tuna and other deliciousness hidden in the trees
They were close by the house, but safe from the other animals
Could it be that this was for him?
He didn’t care
He ate it and for the first time he could remember he had a full belly
He purred of contentment
He hadn’t purred before

Months passed and the food that was laid out for him, got closer and closer to the house
He found out that the vicious dogs were not vicious at all, but old, slow furballs
They were super friendly, just like the cats
And there was this woman that kept calling out to him
‘Major Tom, Major Tom, Tommieee…’
He realized she was the one that had been feeding him all this time
That was nice of her, he thought
But still he wouldn’t let her go near
He was and remained cautious

But lowly slowly, over the course of months, he started to trust her
He didn’t think about it, really
He enjoyed playing with her and being stroked by her
But he wouldn’t let her lift him up
There were limits

Then one day she was gone
No more food, no more play, no more cuddles
The other people in the house forgot to feed him
Eventually, they even tried to chase him away
He was sad
He didn’t know what to do
The dogs allowed him to eat their leftovers, so he didn’t leave
At least he would survive there
But it was not the same
He sensed something new
Was that missing?

Then one day, she was back
She brought tuna
He was so happy and hungry that he didn’t notice she tricked him into entering a cage
She locked the door while he was eating
When he found out, it was too late
For the first time in his life he was trapped
He felt betrayed
He should never have trusted this woman
He tried to escape
His head was bleeding, but he couldn’t get out
The woman spoke reassuring words
‘Calm down Tommie Tom, it’s okay’
But how could it be okay?
He was trapped!
He was furious!

Then the journey to hell began
Or so he thought
He was put in a car
There was unbearable noise, shaking and heat
He was panicking
He was sure he was going to die
He couldn’t breathe
He couldn’t leave

And then, just as sudden as it had started, it was over
There was silence and coolness
The door of the cage was open
He was somewhere in a friendly house
The reassuring voice of the woman said
‘It’s okay Tom, sorry you had to go through this
It’s okay now’
Slowly slowly he calmed down
He cooled off and the panting stopped
He smelled tuna and after a while he thought ‘what the heck’ and came out of his cage to eat
He ate it all and when he was done, he was okay with her stroking him
He was a very forgiving cat
He even purred

Since that day he got all the food he wanted
He got his own place, a little woolen carpet next to the fire place
He got his own home
He got all the warmth, love and cuddles he could wish for
His fur grew thick and white
His heart grew big and trusting
He was a happy cat
All his dreams came true
And they lived happily ever after
But he still wouldn’t let anyone lift him up
There were limits