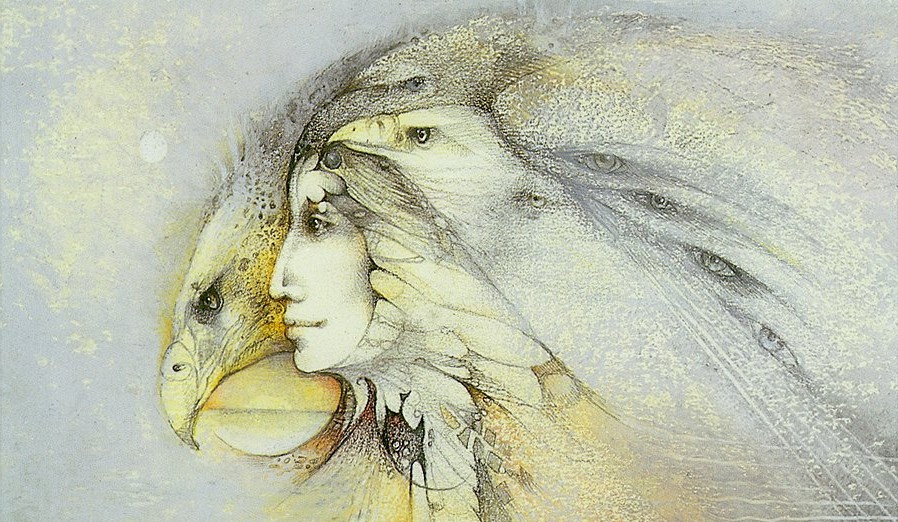 My two grandmothers were very different. One was fat and cheerful, the other one thin and strict. I always wondered whom I would resemble most when I reached old age. When I was 16 my mother came to watch a theater show in which I played a queen. I was enveloped by, or actually squeezed into a far too tight black dress. I thought I looked terrible, but the director insisted. ‘Child, you were exactly your grandmother’, my mother said after the show. She meant the thin one, my father’s mother. I was secretly relieved, but this aside… More about my grandma later.

The boundaries of reality
Reinoud Eleveld, my Tao teacher, always said: ‘In this training two things really matter:
1. How to maneuver in the energetic reality.
2. How to expand the boundaries of reality.’
Ayahuasca is an enormous challenge in both respects. She doesn’t only expand the limits, but can make them disappear totally! Recently I did an ayahuasca retreat in Peru, guided by Shipibo shaman Don José Campos. What an adventure: 26 people from all over the world gathered to drink a hallucinogenic medicine – or actually an entheogen (see note below) – from the jungle. We did three ceremonies in total, one every other day. At the beginning of the week Don José said: ‘In working with ayahuasca three things really matter:
1. 95 % of what happens here is your own doing, 5% is the work of ayahuasca. You are responsible.
2. All drama you create is meaningless. Just stop it.
3. Realize how you are powerful beyond limits. Reclaim your own power and no longer project your power onto anything or anyone in the outside world.’

In my experience with ayahuasca thus far, it had felt like the other way around when it came to the 95%, but I understood what he meant. I had noticed that my Tao Training experience was an immense help during ayahuasca ceremonies. The exercises I had practiced for so many years helped me to stay present in the midst of the storm, to not lose myself in fear or other emotions. So I used my practice during the ceremonies – and it worked! At the same time ayahuasca also craves surrender, the complete letting go of control. Maybe the purging is part of that surrender. In particular, scientifically educated or religious people can get into trouble during such ceremonies, because they will be forced to let go of their beliefs. Ayahuasca is challenging for everyone, but most of all for the faint hearted and dogmatists.

The source of all suffering
When you do three ceremonies in such a short time, it all melts together into one deep inner journey. During my first ceremony I was yet again confronted with the trauma of my early childhood. Crystal clear I saw how my personal pain had determined a big part of my life, especially how it had influenced my children. Realizing how I had caused them pain cut straight through my soul. I cried so much that first day. Even still, this was nothing compared to the second ceremony. I was shown the big picture: how my trauma had been transferred from my father, who in turn was traumatized by the Japanese concentration camps in Indonesia. There are energetic forces out there that are so demonic they can destroy whole populations in one go. War and concentration camps are part of their agenda. At the start of my retreat I had requested: ‘Please show me the origin of my personal suffering and that of the suffering of mankind.’ But when I got the answer and was literally shown, as if in a movie, the full extent of the crimes mankind can be driven to, I realized how overconfident I had been with my intention. I begged it to stop. Just at the moment I thought I couldn’t take any more, the visions stopped.

Beyond the veil of death
With every ayahuasca ceremony there is a balance between pain and joy, work and relaxation, suffering and ecstasy. Even the day after the second ceremony I felt wonderful and grateful. With the third ceremony my grandmother came to visit. It was the thin one. She was as strict as before.
‘What are you doing lying there – dreaming and doing nothing?’, she said. ‘Get up! There is work to do!’
I wasn’t the least bit surprised, even though she had been dead for more than 15 years. Grandma shared with me that she was deeply worried and sad. She showed me her memories: images of the camp; her emaciated children, amongst whom was my father; the hunger, the cold, the humiliation. She expressed her regret and remorse. ‘I should have done more’, she said. ‘I didn’t do it right.’ I realized she still hadn’t let go of the past. Her soul, even now she was dead, was still preoccupied and obsessed with the trauma she had experienced in her last life. ‘Dear grandma’, I said. ‘The war is over. You did what you could. You did very well. Your children and grandchildren are fine, we are not hungry, we are well fed, we are warm and safe.’

Warm bath
I gave the most heartfelt speech ever, but my grandma didn’t believe me. I knew she had suffered from malaria all her life and since the camp had remained very scrawny. The cold and the hunger had never left her. ‘Okay, you stubborn old woman’, I said. ‘Come. Let me make you feel it. Come into my body and feel how soothing it is to be healthy and warm, to have flesh on your bones.’ I didn’t even know that such an experience was possible myself, but at that moment it felt like the most normal thing in the world. After some hesitation she agreed. It was an interesting sensation to feel the etheric body of and old, bony woman sink into my own body. I could sense what she felt too: a warm, deep relaxation, just as when you slowly sink in a delicious bath. ‘Do you believe me now?’, I said. ‘I’m your grandchild. Thanks to you I’m here. You did well.’ ‘Mmm’, she replied absentmindedly. ‘Lovely. I think I’ll stay.’ This was yet another challenge. I really didn’t feel like carrying the spirit of my old granny with me the rest of my life. ‘No’, I said, friendly but firm. ‘You are dead and I am alive. This is my body. You are supposed to go back to where you come from. It’s a good place to hang out. When you’re dead you can finally relax and recover from life. Allow yourself to finally do that. Enjoy your death, grandma.’
To my relief she agreed and without further ado left my body and floated out to space. I felt intensely grateful for having been able to help my grandmother.

Real life
Three weeks later I received an email from my father. I hadn’t heard from him for 12 years. Now, out of the blue, he expressed his wish to restore contact with me. I was certain there was a connection between my father reaching out and the ceremony with my grandmother. Of course he didn’t realize, but I did. And I’m sure my grandma did too.
__________________________
Ayahuasca is an entheogene: a sacred plant, being used in rituals with the goal to awaken the inner divine. The adjective means: ‘Coming from the God within.’